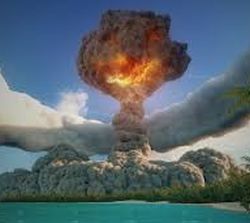 “Bomb Carbon” Has Been Found in Deep-Ocean Creatures

“A group of scientists have now found radioactive carbon-14—at levels high enough to indicate it originated from the detonation of nuclear bombs—in the flesh of shrimplike crustaceans living in the trench. “Typically, we say the trenches are far away from us; they’re very deep and they’re pristine. But actually, they’re not,” says earth scientist Jiasong Fang of Hawaii Pacific University, who worked on the new study. “Everything can get into the trenches.”

“Scientists can trace the reach of aboveground nuclear detonations, the first of which was conducted in 1945, by measuring levels of carbon-14—a radioactive isotope of carbon produced when neutrons from nuclear reactions collide with nitrogen atoms in the atmosphere. (It is also produced naturally, at lower levels, by cosmic rays bombarding the atmosphere.) Atmospheric carbon-14 levels doubled in the 1950s and 1960s as scores of hydrogen bombs were tested. A very small amount of the “bomb carbon” from these gigantic explosions has decayed, but the rest has spread around the world and been taken up via carbon dioxide by plants, which are then eaten by animals—including humans.”

The article goes on to say:

“Until now, it has been unclear whether bomb carbon has managed to spread into the farthest crevices of the world, especially the deepest seas. It would have taken natural oceanic circulation about 1,000 years to carry it to the depths of the Mariana Trench. And in fact, testing for the new study showed that the waters of the trench did have low levels of carbon-14—which is what the researchers expected, given the long travel time from atmosphere to deep ocean.”

The above statement is astonishing. Why would we be concerned about “bomb carbon” in the Mariana Trench, when we have bomb carbon floating all around us! Since the 1950’s, dirty bombs have been triggered by both the United States and USSR and yet the population seems oblivious to this fact.

In fact, whales have been washing up dead on west coast shores thanks to the Fukushima melt down, which estimates between 300 to 800 tons a day of radioactive waste is dumped into the ocean! But wait, what are the “cover up” media reporting? That whales are dying from plastic intake and boats hitting them, not all the radioactive waste. It doesn’t take a genius to look at the DRAMATIC loss of aquatic life stemming out from Japan to realize Fukushima is the culprit.

Worse, they plan on holding the 2020 Olympics, in guess where? Tokyo! with the athletes being housed in Fukushima. Would you go? If you do, be sure to take potassium iodide. As a parent, you would have to be out of your mind to allow a family member to dwell ANYWHERE in Fukushima, let alone eat local food. If the Japanese want to play ignorant and gamble their children’s lives that’s on them, they live there, but anyone else would be stupid to do it with theirs.

Just take 10 minutes out of your busy life to educate yourself to the world you live in and the consequences of what you are consuming and where you are traveling.