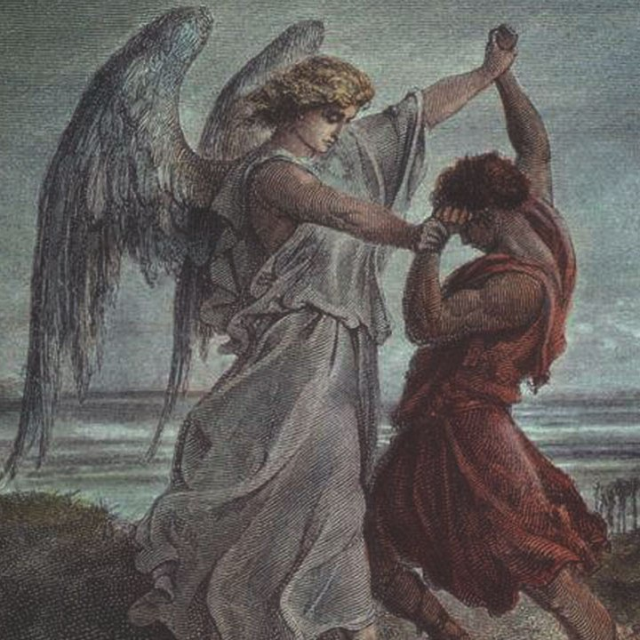 There was once two sons, the one named Yefeife and the other Logos.

Now each was groomed to serve before the King and each son being in his manner to understand according to the many gifts bestowed by the King in their raising.

The two sons had great power and was allowed to go forth and show the might of their power as granted by the King, whether for good or evil as they saw fit.

Now the King’s dominion spread far and wide and the King said, “My sons go forth and cross over my dominion that you see stretched out before you and show me what you have learned in all the years of which you have been raised.”

“Therefore, Yefeife, go to this part of my kingdom and do work amongst the sons of men for my glory.”

“Logos, you will go to this part of my kingdom and to show forth my glory to the sons of men there.”

“After a time I will inquire of you, my sons, in what manner of work you have rendered unto the sons of men for the glory of my name.”

And the two sons said, “Yes Father,” and departed according to the word of the King.

After many years the Father sent his servants to inquire of the work of His sons and so they departed out and came back after a time with the news.

The King said, “Tell me, what news is there of my sons.”

And the servant named, Malak, answered and said, “Oh glorious King here is the news of which you inquired.”

“Yefeife has built great kingdoms amongst the sons of men. He has combined the kingdoms into one people and they do accomplish mighty works of wonder. He has caused men to build great cities of wealth and power for the glory of your name.”

“And what of my son Logos?” asked the King.

Malak answered, “Logos my King, has not built any great cities, nor commanded wealth and power, but has lived amongst the sons of men as a vagabond, wandering to and from amongst the men learning from them.”

And the King said to Malak, “Now let my sons complete their work and when they are satisifed bring them back before me.”

Now after a great amount of time the King again inquired of Malak, “Report of my sons, tell me of their progress.”

Malak, therefore, departed out to observe the sons and came to Yefeife first.

“Yefeife, the King inquires of you and your progress and what shall I say to the King?”

Yefeife answered, “Behold, I have created wealth and power for the sons of men to glorify the King and they have corrupted themselves. Look now upon the works of their hands, for they do every rebellious and wicked deed imagined. For whatever comes of the heart of man the power only increases the magnitide of their evil and there is no end to what men will do to appease their lust and desires.”

Malak, then departed and found Logos and said, “Son of the King, I am here to inquire of your progress to report back to the King all that I see and hear.”

And Logos answered, “I have wandered the Kingdom of my Father amongst the sons of men and they are down trodden and poor and have many wicked devices placed over them by the sons of men who desire power and wealth and the lusts of their heart. For I work day and night to heal the lame, sick, and weak and they have little to comfort them in their distress. Malak, please go and ask my Father, the King, for his aid in these matters.”

And so Malak departed to make his report before the King, but on his way, Yefeife met him and asked, “What did my brother say to you to tell the King?”

And Malak made known the matter, whereupon Yefeife was roused to anger and said, “I shall return with you to speak with the King,” and so they left out.

Now when the two returned before the King, Malak was about to report, but Yefeife spoke and said, “My King I have returned to report on the goings of men.”

And the King said, “Yefeife, did I not send my servant Malak to report on the goings on of my sons, why then have you left without the sons of men to come here before me?”

And Yefeife answered, “My king the sons of men do wickedly in your kingdom, for there is none righteous among them, no not one, and they should be destroyed from the land so that we may establish our kingdom. For they are dirty beasts who inquire only after the iniquity of their hearts desire.”

And the King said, “Malak, what is the report from Logos?”

Malak answered, “Oh glorious King, Logos has inquired of his Father for your aid in helping the sons of men, for they are sickly and down trodden because of the power and wealth of the men who reside over them. And though Logos toil night and day, the sons of men find no relief.”

And the King asked Yefeife, “Why have you given the men such power to destroy one another and increased their wickedness through the guile and lusts of their heart?”

And Yefeife answered, “For behold, you the King had sent me amongst the sons of men, to teach them and progress them as I was reared and learned to do and yet the more the sons of men learned, the more wretched they became. Let them now destroy themselves that we may make a kingdom of our brethren and they will serve us as the beasts of the field.”

And the King was greatly angered at Yefeife’s answer and said, “Have I desired to destroy the sons of men would I not send my mighty forces upon them and wipe them from the land?”

“Instead of obedience to your King, you have devised a way to destroy the men in whom I inquired to keep upon the land for the glory of my name. Now therefore, go, you are cast out of my kingdom for your disobedience and you shall make your dwelling amongst the men, but you shall not wholly destroy them.”

“All that you do to the sons of men I shall require of it from your own hand and at your own destruction.”

And Yefeife was greatly angered that the King had rejected him from His kingdom and would make his way amongst the sons of men and in their corruption he would find pleasure from his exile.

Now in time the men had greatly increased in the land and Yefeife would greatly increase their power and wealth with corruption, sin, and the lusts of their heart so much so that the King was sorrowful.

And the King said, “Behold my son does corrupt man greatly so that I shall not enjoy them in the land, nor that they should glorify my name, but only through wickedness of deed in their hearts and thoughts and works.”

“Malak, go to and bring Logos, for I have a proposal for my son.”

So Malak departed to bring Logos before the King and upon reaching the son did find him healing the sick and said, “Logos you must come with me before the King.”

And Logos responded, “Surely the King would not have me depart from amongst the sons of me, for my brother Yefeife greatly persecutes them and I must attend to their aid. Nevertheless, the King be obeyed and I shall return.”

And when Malak and Logos arrived before the King, Logos lamented, “Father why have you brought me back to the kingdom? For the sons of men require of me for there is none to oppose my brother Yefeife and his wrath upon the sons of men.”

And the King answered, “Oh my good son, I am well pleased that you do give yourself for the sons of men, but their corruption has come to mine ears night and day and they should now be destroyed from off the land. For they have now corrupted all the earth and the blood of the innocent of all creatures cry out for vengeance.”

And Logos said, “Father, my King, for only your great mercy will deliver the sons of men. Let me go back and the wrath of Yefeife can be fulfilled in me. For all his anger in men can be taken upon myself and therefore the sons of men shall not be destroyed by you and your kingdom can be established with them. Therefore, Yefeife can pour out his wrath upon me and likewise you will pour out your wrath upon Yefeife and remove him from the sons of men.”

“For according to your judgment my King there must be wrath for wrath to appease your righteousness and I do willingly accept Yefeife’s wrath for your vengeance.”

And the King said, “I will grant Yefeife time to amend his way. Until such time I will send my servants amongst the sons of men to see who will listen to my word or the words of Yefeife and then my son you can go as I grant what you ask.”

And the King announced, “All who hear my son Logos will be spared my wrath, but those who adhere to Yefeife, them shall I destroy from my land when I take my vengeance for my son Logos.”

“Now Malak and the Captains of My Host, go forth to the sons of men and report all that they say or do that we may know whether they serve the King, Yefeife, or my son Logos.”

And Malak and the Captains departed, and go to and fro amongst the sons of men, to report all that men say or do before the King; until that great day of vengeance for Logos, poured out to appease the righteousness of the King and to cease the wrath of Yefeife.