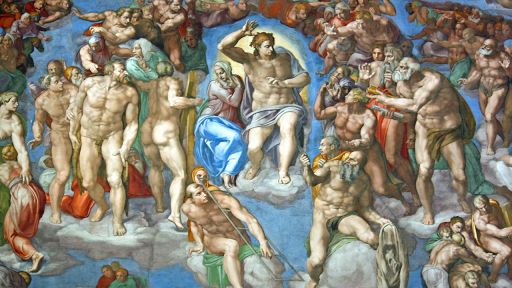 Behold my servant, whom I uphold; mine elect, in whom my soul delighteth; I have put my spirit upon him: he shall bring forth judgment to the Gentiles.

This is My servant, whom I uphold, My chosen one, in whom I delight. I have put My spirit upon him, He shall teach the true way to the nations.

But in those days, after that tribulation, the sun shall be darkened, and the moon shall not give her light,

And then shall they see the Son of man coming in the clouds with great power and glory.

“For many are called, but few are chosen.”

After this I beheld, and, lo, a great multitude, which no man could number, of all nations, and kindreds, and people, and tongues, (the sheep) stood before the throne, and before the Lamb, clothed with white robes, and palms in their hands;

And cried with a loud voice, saying, Salvation to our God which sitteth upon the throne, and unto the Lamb.

And all the angels stood round about the throne, and about the elders and the four beasts, and fell before the throne on their faces, and worshiped God,

Saying, Amen: Blessing, and glory, and wisdom, and thanksgiving, and honour, and power, and might, be unto our God for ever and ever. Amen.

And one of the elders answered, saying unto me, What are these which are arrayed in white robes? and whence came they?

And I said unto him, Sir, thou knowest. And he said to me, These are they which came out of great tribulation, and have washed their robes, and made them white in the blood of the Lamb.

Saying, Hurt not the earth, neither the sea, nor the trees, till we have sealed the servants of our God in their foreheads.

And I heard the number of them which were sealed: and there were sealed an hundred and forty and four thousand of all the tribes of the children of Israel.

“And I looked, and, lo, a Lamb stood on the mount Sion, and with him an hundred forty and four thousand, having his Father’s name written in their foreheads.” Rev 14

A “seal” σφραγίζω, is to Israel from each tribe, the servants of YHWH by Elohai heavenly host.

A “mark” χάραγμα, is of the human world, done with human instruments, or upon a body.

The mashiach beast will “mark” his flock with the number of the beast 666.

“And the third angel followed them, saying with a loud voice, If any man worship the beast and his image, and receive his mark in his forehead, or in his hand, The same shall drink of the wine of the wrath of God, which is poured out without mixture into the cup of his indignation; and he shall be tormented with fire and brimstone in the presence of the holy angels, and in the presence of the Lamb: And the smoke of their torment ascendeth up for ever and ever: and they have no rest day nor night, who worship the beast and his image, and whosoever receiveth the mark of his name.” Rev 14:9-11

And he causeth all, both small and great, rich and poor, free and bond, to receive a mark in their right hand, or in their foreheads:

And that no man might buy or sell, save he that had the mark, or the name of the beast, or the number of his name.

Here is wisdom. Let him that hath understanding count the number of the beast: for it is the number of a man; and his number is Six hundred threescore and six.

So we have 3 words that should not be confused:

Elect – the sheep of HaMashiach Yeshua

Mark – those who follow the beast and receive the mark 666

Then if any man shall say unto you, Lo, here is Christ, or there; believe it not.

For there shall arise false Christs, and false prophets, and shall shew great signs and wonders; insomuch that, if it were possible, they shall deceive the very elect.

Behold, I have told you before.

The beast will be so convincing as he will be displayed through the Talmud by the false prophet, by miracles, and all the prominent Karaite, Rebbe, Rabbi will accept him as mashiach:

“And he exerciseth all the power of the first beast before him, and causeth the earth and them which dwell therein to worship the first beast, whose deadly wound was healed. And he doeth great wonders, so that he maketh fire come down from heaven on the earth in the sight of men, And deceiveth them that dwell on the earth by the means of those miracles which he had power to do in the sight of the beast; saying to them that dwell on the earth, that they should make an image to the beast, which had the wound by a sword, and did live.” Rev 13:12-14

All division within Judaism will cease and all sect will gather around the beast, based on the false prophet bringing fire down from heaven like Eliyahu (Elijah). The false prophet is like John the Baptist, preparing the way for the counterfeit mashiach.

Adonai says, that even those who have the Holy Spirit, his sheep, if it were possible, would be deceived by what occurs,

“See we told you that your Jesus was not Messiah, here is the real mashiach!” They will show by Talmud and by Neviim (prophets) and miracles how they “know” that their beast is the anointed one. The beast will rebuild the temple, solve all financial crisis, and bring all races into peace and harmony. Then the beast will proclaim himself YHWH on earth in the Temple.

Once the beast proclaims himself god he will turn on the Jews for destruction and all nations of the earth will gather together for war, as the Day of the Lord will be at hand.

And he opened his mouth in blasphemy against God, to blaspheme his name, and his tabernacle, and them that dwell in heaven.

And it was given unto him to make war with the saints, and to overcome them: and power was given him over all kindreds, and tongues, and nations.

And all that dwell upon the earth shall worship him, whose names are not written in the book of life of the Lamb slain from the foundation of the world.

If any man have an ear, let him hear.”

Here what Adonai says, O Israel, flee your doom! For no one can serve two masters. You will either serve the beast or you will serve YHWH through HaMashiach the lamb of God whom you reject.

And I looked, and, lo, a Lamb stood on the mount Sion, and with him an hundred forty and four thousand, having his Father’s name written in their foreheads.

And they sung as it were a new song before the throne, and before the four beasts, and the elders: and no man could learn that song but the hundred and forty and four thousand, which were redeemed from the earth.

These are the 12,000 from each tribe of Israel that my God will redeem. How many Jews will perish during this time? This I do not know. The Zawada family survived Auschwitz and the destruction upon the Jews and Christians by the beast will be far greater than anything Hitler ever did. As our Lord said,

“For then shall be great tribulation, such as was not since the beginning of the world to this time, no, nor ever shall be. And except those days should be shortened, there should no flesh be saved: but for the elect’s sake those days shall be shortened.” Yeshua Matt 24:21-22

Who are the “elect” again? The sheep.

The elect shall suffer even as our Lord has suffered:

“Then shall they deliver you up to be afflicted, and shall kill you: and ye shall be hated of all nations for my name’s sake.”

Now many of you do not believe you shall suffer as our Lord has suffered – to death that is, during the 42 months. In fact, there are many fancy rapture theories that eradicate a Christian’s suffering during the tribulation, Daniels 70th Week, of which has not been expounded on here.

Many of you are confused on the difference between: Seal, Mark, and Elect. In that confusion you are forced to do several things:

That is why rapture theories create mass argument and confusion. You did not realize it was a trick of the enemy to sew strife and tares. Lord willing my God will grant knowledge of such in upcoming documentation, but much has been said on this subject that creates anger and debate to no end. For many a false prophet has earned a living from such theories, exciting, and scattering the sheep.

The beast and false prophet who deceive Israel and the world will wage war against all Christians. The Christians will be as the Jews during WWII. They will be deprived of living, money, social status, hated, hunted, and murdered all over the earth.

Make no mistake of what I am saying here, Jews and Christians alike will be destroyed during this time. All of Israel and the world will be deceived by this counterfeit mashiach. The enemy of God, the angel cast down, wishes to destroy the people, Israel, sanctified by YHWH as has been done throughout history. Over the last hundred years the Zawada family has been on the tip of the spear of that wrath, and many were murdered by the Nazi regime.

No one can say we did not suffer, or that the holocaust did not exist, as some egregiously do. The next chapter in human history will be the suffering of all mankind, with the focus of wrath on Christians by the beast, just as Hitlers wrath was focused on the Jews.

As it is written:

Lo! The day of the LORD is coming With pitiless fury and wrath, To make the earth a desolation, To wipe out the sinners upon it.

The stars and constellations of heaven Shall not give off their light; The sun shall be dark when it rises, And the moon shall diffuse no glow.

And I will requite to the world its evil, And to the wicked their iniquity; I will put an end to the pride of the arrogant And humble the haughtiness of tyrants.

I will make people scarcer than fine gold, And men than gold of Ophir.

Therefore shall heaven be shaken, And earth leap out of its place, At the fury of the LORD of Hosts On the day of His burning wrath.

We await O Lord, blessed be your mighty name YHWH forever, and praise be to the name of HaMashiach Yeshua, our everlasting King, as promised to David, the redeemer of mankind.