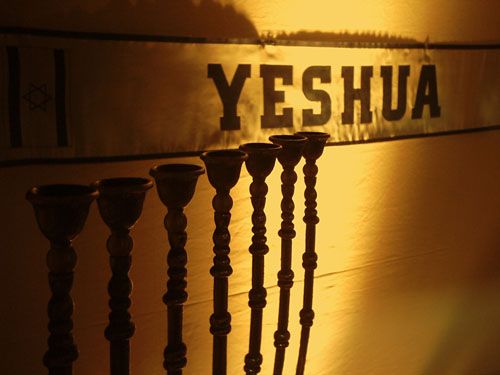 Did you believe on the name of Christ because you read about Yeshua in the Bible? Well if you did you will see His name as Jesus in the New Testament. Does that mean you have been saying His name wrong the entire time? Yes, we all have. Even those who think they are saying it correct now, really do not know for sure, as you and I were not there two thousand years ago.

We do know however that our God, according to His word is faithful to fulfill His promise. Whether you are saying Jesus with a G sound, or Yeshua the Hebrew reading, Adonai know you are calling to Him. You see all translations are flawed, but the deceit of men will tell you otherwise. Educated authority and laymen alike will tell you “they” are sure of the correct translated version, when they never have been. All are basing what we have today off documentation that is far newer than it’s original content.

I want you folks to understand something, we have over 6,000 languages in the world being spoken today.

Below is a direct Quote from a person on YouTube. I am pointing this out to correct and make sure you understand the difference between the deception that is causing division in Christianity.

“Many Christian call the name of the messiah as YESHUA, Yahushua instead of YAHUSHA. But using the wrong name is putting his name in vain which is the 3rd commandment.”

Here is the difference: SHUA = in vain, desolate. Wickedness and evil, to cry out for help..

Ok, so what we have here is a person who does not speak Aramaic, attempting to convince the sheep of the proper way to say Yeshua AND if you say it wrong you are taking Jesus name in vain.

I am telling you 100% right now, you are not taking Jesus’ name in vain. DO NOT BELIEVE IT!

This person is literally telling you that you are WICKED and EVIL and breaking God’s COMMANDMENT for calling on His name in your language or your chosen translation! TOTALLY FALSE DO NOT BE DECEIVED!

This is doctrine from the fallen angels – not from GOD!

It’s a false teaching and I hope our Lord corrects this man for leading the sheep astray. Here is a simple pictorial explanation: 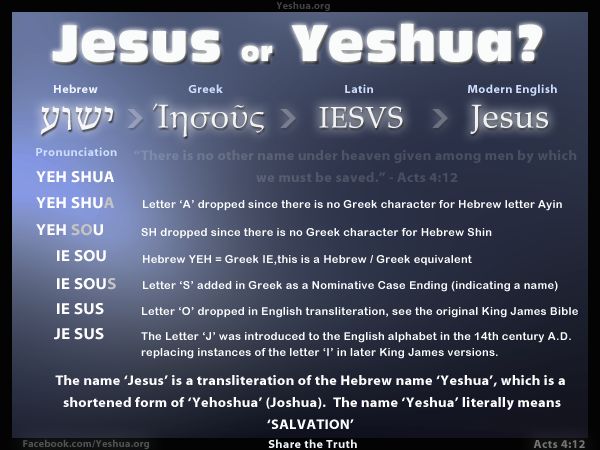 You will see many different ‘translations’ of the word Yeshua on the net.

First off shua means “canaanite” or “cry out” and this is absolutely a false Hebrew translation of Jesus name – intentional? No, this is the English translation from greek to english to hebrew and is why it is not the original format. Also a name ending in the “ah” sound is feminine.The Greek for Jesus is IESOUS, pronounced “us” at the end for masculine, and of which the english “Jesus” name evolved from.

Yes the Rabbi’s are laughing at Christians wrestling with saying the name of Jesus in Hebrew. As the Hebrew word is rendering from Greek to English to Hebrew which produces a feminine sound/alternate name from the original. When I say laughing, I mean, “You Christians don’t even know the name of your God,” as in Judaism, the name of God is guarded with titles, such as Hashem, Elohim, Adonai, and G’d.

Today many of my fellow Jews don’t know how to say the name of YHWH, as they only know the titles of God. Although many believe they know how to pronounce the name of God, (watch the youtube videos of Rabbi and such) they do not really know how. Only Elohim can teach someone to say His name correctly. Your translation from the 10th century will not help you. This is the hypocrisy of men.

All those born today learn the dialect from their parents, not from the men who wrote the verse in their native tongue some 4,000 years ago.

Above is such a simple statement, it baffles me that teachers on religion vs language experts, do not understand this very fact, or are too blinded to see reality. Many Priest/Rabbi believe their position, or understanding of scripture, makes them an expert in languages spoken thousands of years ago, which is mind boggling ridiculous.

Again, it all comes back to the EGO of mankind. The, “hear ME< ME< ME” mindset, rather than what God has already established as a foundation. Much confusion, recklessness, and false interpretation can be traced back to allegorization of Elohai word, which include the fantasies of how Elohai & His son Jesus’ name is pronounced.

Now I agree with the Rabbi and Karaite when it comes to God’s actual spelled name. We should never use this in casual conversation as the name of the Most High God is Holy. This is a teaching lesson, however I still believe YHWH the spelled out name, should not be displayed to just anyone – only those who seek God and His salvation.

Nowhere on this site have I written God’s real name, nor will I, for this is Holy to me, and not to be read or taken out of context by those who are not with God. Why should I allow the heathen to know God’s real name? First seek His salvation then His name will be revealed to you. I do see God’s name spelled out in youtube video’s of worship music on this site, but not by me, the author. As Adonai has said,

“Give not that which is holy unto the dogs, neither cast ye your pearls before swine, lest they trample them under their feet, and turn again and rend you.” HaMashiach Yeshua Matt 7:6

If you are listening to music worshiping YHWH then I agree to the visual seeing and saying of His name.

You shall faithfully observe My commandments: I am the LORD.

You shall not profane My holy name, that I may be sanctified in the midst of the Israelite people—I the LORD who sanctify you,

You shall not swear falsely by the name of the LORD your God; for the LORD will not clear one who swears falsely by His name.

Put to death? That’s what YHWH says. Do you understand? Blaspheming IS NOT mispronouncing, unless you are doing it in jest, disrespect, or any form of slander.

The Hebrew to English of Jesus (Greek iteration) is Yeshua, this is NOT the Aramaic.

Both Arabic and Aramaic are different:

How many of you are going to start saying Jesus name as Eashoa?

And yet the above name is more accurate than ‘Yeshua,’ but no one will understand what you are talking about!

Do you know anyone who speaks Aramaic?

Less than a million people speak a new form of Aramaic, so who are you going to communicate with? The rest of the world will have no clue of what you’d be saying!

OR maybe you think you can educate everyone on how to say the name Jesus in Aramaic other than the way they have been saying it their whole life!

Makes a little more sense, if you just…stop, take a breath, and observe the confusion.

Now does that mean Jesus, Yeshua, or YaHusha, our Lord is going to LOVE YOU any more or less than He does now for saying His name inaccurately? NO! and that is the deception!

I have received salvation and the Holy Spirit from God YHWH through the name of Jesus, not the name Yeshua!

The name Yeshua was not common when I called on the Lord for salvation, but today there is a huge debate about the name to scatter the sheep. The Lord will make clear His name when He comes back. Right now those who are skilled in Aramaic admit they are only guessing to the correct pronunciation.

How then, you, not being a language expert, are going to know for sure WHAT and HOW Jesus name is rendered back to Aramaic.

It’s quite ridiculous if you just {stop!} and logically think about it. Stop getting carried away by the ‘trends’ that so easily sway the flock.

The name given to my Jewish forefathers by Polish authority is Zawada, which was a Polish insult 300+ years ago. There are many village and city named Zawada in Poland and of course this is not considered an insult today. When someone says my last name, I do not take it as an insult, nor does the person saying the name have any understanding of it’s true meaning!

Christians to be absolutely clear – salvation comes through accepting HaMashiach, Jesus, Yeshua, YaHusha, in any language you speak! In any dialect or mispronunciation God will save you and accept you.

Rest assured Elohim hears you through the name of Jesus or Yeshua and you will receive the same gift of the Holy Spirit by asking Him for salvation, amen.

If this website is informing you or helping you please help us by donating. Your gift will help spread the Gospel to Jewish communities, the secular, instruct Christians, and those without Christ Jesus in their lives. All who donate receive prayer for blessing from YHWH through HaMashiach Eashoa our savior. Thank you for your support and may the peace and blessing of YHWH be upon your household!