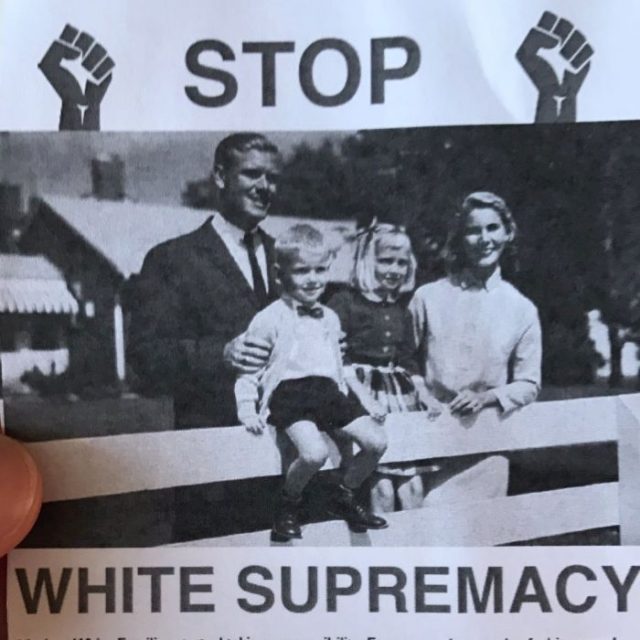 The vitriol narrative of white supremacy flows to every white American – Jewish, Polish, Irish/Scottish, Italian, especially German, and any European descent that is Caucasian.

Jewish, as listed above, of course is not a race category unto itself as many academic attempt to paint this laughable fraud. The insane extremists who believe in sheer fantasy would love to see themselves in some special DNA category all to themselves. In reality those of us who are considered Jewish are predominantly European’s with the primary aliyah from Germany, Poland, and Russia.

Oddly enough Russians are not considered Nazi or white supremacy as they are the embodiment of Marxism to which many a rabbi, Israeli political parties, the American Democratic party and it’s atheist wings are impregnated with. Since they killed Nazi’s, don’t live in America, and Antifa is communist, the white supremacy shadow does not fall upon the Muscovite’s.

Notably the media family conglomerate operating under a banner of rich atheist traitors to the Jewish people who claim themselves Jews have no problem manufacturing pornographic movies, horror slaughter films, anti-Christian dogma, take Elohim name in vain, promote anti-Torah beliefs in transgender, LGBT, and homosexuality life which no rabbi can legally approve of.

All via dogma found within Sanhedrin, Gittin, Yevamot, etc,. approving of such heinous sin through a Jew as legally poured out upon the gentile by authors of filth, lust, and murder.

They have no problem idolizing false gods, such as Thor, to the nations as long as it makes them money and perverts the gentile – yet YOU are the one doing it and must pay for your sin. Yom Kippur does not wipe this out as many a rabbi will tell your doomed soul.

Moreover, they denigrate and curse President Trump when Torah absolutely forbids such.

These traitors to Torah promote destruction of the white race in multiple formats for the point of attrition to constantly repeat in the minds of the world population that the “American” white man is the face of all evil, the promulgator of world destruction as drummed over and over through Jewish authors and writers who are generally non-practicing Jews following their anti-Jewish masters prescription of mass propaganda for taming of a culture.

These anti-Christian bigots are responsible for creating the most antisemitic atmosphere ever to exist in Jewish history all the while blaming and accusing the white American who sits on the couch drinking beer watching the Simpsons of being a “white supremacist racist Nazi,” when he simply works a 9 to 5 job and bowls on Thursdays.

Nevi’im are clear in historical scripture of describing an atmosphere where all the world is against Israel as the days of Moshiach approach.

Do these absurd Jewish traitors of Torah believe they are aiding in bringing about Moshiach by such treachery through pseudographic apostacy?

Who knows, but we do know that the real Nazi’s of history under which the Zawada’s, my birth name and family, had suffered at the hands of Hitler’s minions – this is the true shoah, not the Chrisitian or atheist American playing video games and buying a McDonalds Happy Meal.

We as Jews are not supposed to talk about these things, about anything that wold constitute “bad thoughts” concerning the Jewish community, yet this very line of thinking has cause a running amuck of Jezebels throughout the world for the stupidity of “keeping quiet” about the bad apples.

Moshe was not quiet when the children of Israel sinned before HaShem. No, Moshe condemned them immediately and crushed them before the people.

Yet today the secular atheists who claim themselves Jews run wild in sin, while media like the Jerusalem Post shower them with praise for their accomplishments as the “best Jews” in science, media, business, and charity.

These celebrated apostates continue to desecrate Torah and slander all Jews who follow Eloheinu with their deeds that cause all of us regular YHWH fearing Jews to reap the antisemitism from their sin. YHWH recompense us guiltless of their evil before you!

However, the enemies of America and Israel portray such actions not only to rip America asunder and destabilize the Middle East, but as prophecy states “the tribes of the North will invade Israel and be utterly destroyed,” so we know this to be from Zechariah and as many others in history have stated.

It’s common sense to us who believe in YHWH and study His word to know who the enemy is, yet very difficult for those who are under the prophecy of confusion through Isaiah and those atheist hordes who are their legions both in Europe and America.

All Jews who downplay the Holocaust for the purpose of selling the nonsense of “white supremacy” to all Caucasians not only offends the survivors and the families of survivors, but shame Israel for your miscreant rebellion of which YHWH has stated will be punished and as our fore Father Jacob has said those that do such belong to “the curse of Jacob.”

Adroitly these charlatans work against YHWH in their heinous schemes and for what? To chip away at a white race of which over 60% of the Jewish population is part of? As our Lord has said “You den of vipers!”

The new ideology leading up to the mass propaganda of “white supremacy” included the ridiculous and outrageous claim that Russian, German, and Polish Jews were never Caucasian at all.

The notion that Menachem Mendel Schneerson is somehow not white is beyond ludicrous, as is portraying the Zawada family with my mixed Polish / Russian ancestry and in which we look “almost identical” and completely different than Sephardic Jews emanating from Spain/Italy.

I assure you I am Jewish and white and have no conflict in saying such reality, unlike the confused liars perpetuating their lies and confusion upon cultures of the world out of their insanity and lust for racial separation.

But there had to be some fictional narrative to say we “Jews” are not white in order to attack the white population in league with the Bear nation and identify as a separate race other than the supremacist American gentile.

It’s hardly a great scheme, but nonetheless effective by the communist oppressors, skilled in destabilizing populations as so well achieved in Russia, China, South Asia, and now both North/South America.

A recent article from the Guardian is one such hit piece aimed at “whitey” and written by an Asian Jew named Sam Levin, if he is indeed Jewish I know not, although the name suggests as much.

Mr. Levin writes, “Since 2018, the 38-year-old data scientist Emily Gorcenski, has been exposing members of the far right and cataloguing white supremacist violence across the US through her site, First Vigil.”

As if almost ALL violence in America is not currently spear headed by the Democratic funded Antifa, BLM, and slavic foreign special forces mercenaries expert in crowd manipulation/agitation/organization wreaking havoc in Democrat cities in which the DNC control the outcome of Police intervention and prosecutorial misconduct by AG’s and State prosecutors granting their allegiance to these treasonous factions.

But you are supposed to believe a different narrative – one they promote 24/7 through their partners family cartel news conglomerate.

The fiction that John Doe Trump supporter is a secret racist “white supremacist” all the while Trumps cabinet is littered with Jewish personna with his grandchildren half Jewish, the Secretary Treasurer Steve Mnuchin Jewish, his attorney of 19 years Jason Greenblatt Jewish as well as David Friedman, son of a conservative rabbi – to name a few.

The finance chairman of the National Republican Committee, Lewis Eisenberg, according to the Times of Israel,

“Was one of a small group of Republican Jewish Coalition board members who did not flee from Trump’s candidacy, and was a major contributor to groups backing Trump’s election — only nine of 55 RJC board members gave to Trump. Alongside Mnuchin, he worked to raise funds for the candidate.”

The division in the midst of the people is proffered by a corrupt spawn of anti-YHWH separatists intent on their own agenda and main aspiration of eradicating Christian belief and practice, while condemning your free speech, any form of non racist existence, and by creating an atmosphere in which you constantly struggle with your family/neighbor’s in politics, gender, or party ideology.

The great division of race, brother against brother, is a Marxist plot with Talmud ingenuity from the traitors of Torah.

This is communism in the most basic language responsible for tens of millions murdered as history so loudly displays.

Only the dumb and blind cannot see such atrocity and surely all these traitors who do such things and claim themselves as Jews are indeed the enemies of HaShem.