First and foremost climate change is a lie as humanity lives in interglacial for this entire generation. Any other argument is from paid for charlatans. If some political canary personality echoes the scheme they are merely pathetic actors playing their part and paid or ordered to do so as any other thespian. Those who actually believe it are morons who can’t read or research for themself and rely on aides, think-tanks, or  “expert tricksters” giving them faulty data.

At the end of every altruistic concept of philanthropy you’ll find some sort of propaganda wing known as “AI” hedged in there. Simply newer propaganda schemes to re-educate the populace through fictional or catered ideology data.

You’ll find that many of these new age altruistic baal movements are from the UK. Yes some of these groups worship baal and if you didn’t know this is where the word “Jew” was invented, through the British Zionist Federation (1899).

The word “Jew” from England does not describe us “Jews” in America, or Poland or Israel, or Europe. It’s a separate English sect with their own hiearchy and clandestine groups as every religion has it’s own community whether Judaism, Buddhism, Christianity, or Islam. Each has compartmentalized units separate from one another. Some are terrorist organizations and others actual G-d fearing entity that helps humanity depending on the belief of the group and the ideology of it’s leaders.

Examine the Future of Humanity Institute, 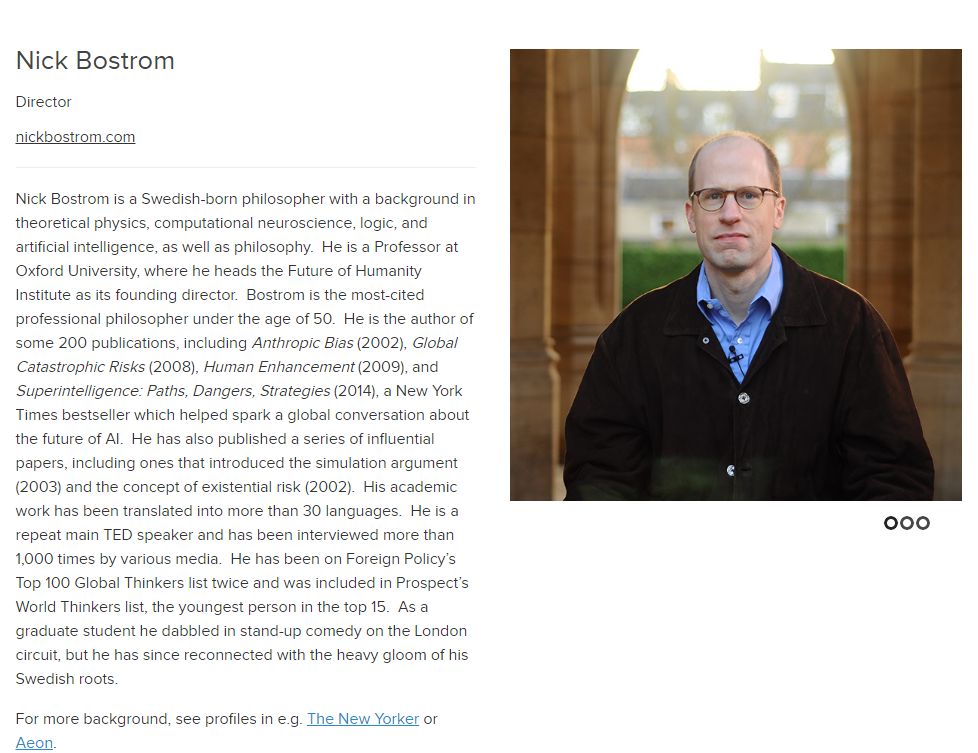 “We should not accept an ethical theory which, conditional on our current best scientific guesses about the size and nature of the cosmos, implies that it is ethically indifferent whether we cause or prevent another holocaust.” (page 3 in the pdf download)

It is this type of thinking where pandemics can be developed for a means to an end.

When this statement is said,

“A right act could then be defined as one that in fact leads to as good a world as any other available act does,”

Then we have justification of genocide.

We’ve seen this thinking too many times in history  from Mao Zedong, Stalin, Hitler, Zimbabwe, Myanmar, Serbia, Indonesia, Khmer Rouge Pol Pot; historians could go on and on on how genocide is always justified as a “means to an end” – the exact same speech as Mr. Bostrom from Sweden.

The Native American Indian genocide to make way for American expansionism under the guise they were “relics of the past” and savages. In the end each tribe was treated like warring clans of the Mohawk, no matter if they abhorred war and violence, all were lumped together as savages impeding progress.

Mr. Bostrom’s Future of Humanity Institute says it all along with his ideology of ethics, or the lack thereof. He justifies AI expansionism through ideology similar to Native Indians in his opening statement,

“Human history, with all its earnest strivings, triumphs, and tragedies can remind us of a colony of ants, laboring frantically to rearrange the needles of their little ephemeral stack.”

This simply translates as since the world is theoretically infinite, canonically infinite, as Bostrom suggest, then whatever happens is merely a blip in history as people are equally happy or unhappy at any given time.

The end justifies the means.

Those leading AI institutes that will undoubtably be educating your children quickly here in the future, writing textbook for both University and High School syllabus, assuredly will include their lack of ethics within the sphere of revised education to mold the minds of children into uncaring fanatics of climate change and eugenic philosophy no different than the Hitler SS.

If you let them.

It will take no less than absolute control of state to state industry to stop these philosophical wizards from destroying culture.

Long term trajectory analysis of human survival models leave out anything that betrays these charlatans models of fabricated climate change and billionaire philanthropist goals (Net Zero) of revising culture under dystopian control by the rich guys determined to live forever when they can’t.

They aim to win with their revisionary ideology of how humanity should “pan out” regardless of input from the colonies of ants who should be directed like any labor force or disposed of if they become “useless eaters.” Especially when the opinions differ from their vision of control and destruction of populations.

I can tell you without a doubt none of the rich kids will want any part of their nightmare vision. If you’re a son or daughter of one of these lunatics, know this, there won’t be a restaurant to eat at, you will not be driving in society, or shopping at Macy’s, hanging out with your friends – it will all be gone. You’ll be living in bunkers until you can’t.

Never forget the statements of these educated professors and Directors of institutes of your demise. All mankind of ego desire their vision to unfold, worship of their deeds and progress. Their names to be remembered for something other than the ants they believe themselves to be.

The rest of us useless eaters will be catering to scenarios Ben Garfinkel’s describes as offense-defense balance scale. And I quote,

“It is widely held that defenders hold a natural advantage in combat. This advantage has a number of sources, including the fact that one is naturally more vulnerable when advancing than when remaining behind cover. Its practical significance is that the attacking force must typically achieve a much greater concentration at a single point to break through. A longstanding rule-of-thumb sets the necessary concentration ratio at 3-to-1.”

Are the aggro-terrorist models familiar with fracturing dynamics or perhaps the simplicity of assaulting a bunker? I don’t think so.

Dynamic entry of barricaded positions is assured as is defeat of exposed positions. I can say without a doubt, those who wish to “depopulate” are exposed and there is a long list of pissed off personnel well versed in dynamic entry.