“Let no man deceive you by any means: for that day shall not come, except there come a falling away first, and that man of sin be revealed, the son of perdition; who opposeth and exalteth himself above all that is called God, or that is worshipped; so that he as God sitteth in the temple of God, showing himself that he is God.” II Thess 2:3-4

I am here to tell you that the year is 2019 and you are not in the 70th week. The world is not about to end and Armageddon is not looming within the next 5 years as many would have you believe. Are we in the last times? Yes we have been since Jesus our Adonai was resurrected and ascended to the Father YHWH.

So the question asked “when shall the beast come to power?” You should look at all the facts and the evidence you have at hand not the theories of men who like to use news clippings and the current natural chaos at hand, or ‘signs in the heavens,’ to prove their theories of when our Lord shall return. The masses are easily swayed to believe the thoughts of men no matter how ridiculous or how politically motivated. Please keep in mind folks that in order for the beast to be revealed, Christians must be hated, Beit HaMikdash (the Holy Temple) must be rebuilt, the United States must delegate it’s entire economic power and the President will no longer be the voice of this nation.

Remember the words of Paul the Apostle:

“Now we beseech you, brethren, by the coming of our Lord Jesus Christ, and by our gathering together unto him, That ye be not soon shaken in mind, or be troubled, neither by spirit, nor by word, nor by letter as from us, as that the day of Christ is at hand. Let no man deceive you by any means: for that day shall not come, except there come a falling away first, and that man of sin be revealed, the son of perdition; who opposeth and exalteth himself above all that is called God, or that is worshipped; so that he as God sitteth in the temple of God, shewing himself that he is God.” II Thess 2:1-4

Yes there are things occurring such as God’s word being removed from the Government, but as we see with George W. Bush and President Trump, Christianity is now enjoying positions of political power on a greater scale and is why many ministers back President Trump regardless of what is actually occurring on foreign soils.

A great falling away means that the Government and society as a whole will detest Christianity, much like during the days of Rome where Christians were fed to lions for sport. This is not happening today, but the exact opposite.

Yes Christianity is declining as it must according to scripture, but institutions are enjoying vast political power and over 70% of citizens claim they are still Christian according to Pew Research. Religious groups in the U.S. by tradition, family, and denomination: 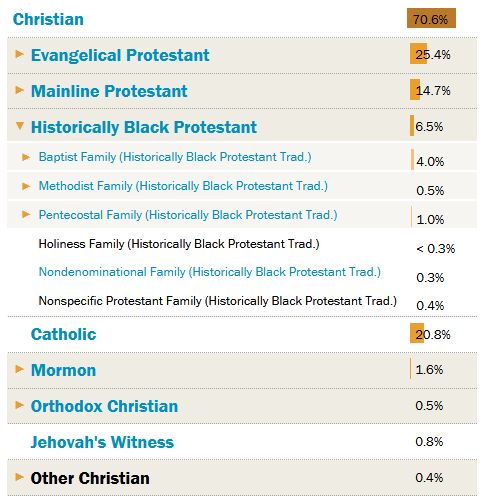 In fact there has never been a U.S. president elected who claimed he was a non-Christian. According to census polls there are over 189,000,000 Christians in the U.S. with Brazil coming in 2nd place in the world at 170,000,000. So again the great falling away is not being seen. Yes we have had declines in Christianity since the 1940’s from 86% of the population, but we can clearly see we are not in a great falling away where Christians are hated the world over. Moreover, this is a process of erosion over time, as the enemy manipulates society through education, philosophy, psychology, and social media.

Also ministers will say that the Christians polled are not really Christians and that these numbers are inflated. I have no doubt that many who claim to be Christian are not, but this does not change the stats or the fact of reality that Christians currently enjoy dominant university teaching and political power. All the theories and lies cannot manipulate reality.

Anyone who attempts to manipulate this data to prove Christianity has fallen away or that the beast is coming soon is simply lying to you. Again, when we are in a time where Christians, who believe in Christ, are hated by all and to be a Christian means to be an outcast AND that all nations hate you for believing in Christ, then we are in a great falling away.

Those who attempt to say otherwise, that we are in this period, or near to it, are simply talking fantasy to prove their own theories that manipulate the words of YHWH. When you look at the bottom line for the ulterior motive, there will generally be something to do with money, fame, promotion, sales of some kind etc,.

Others point to a movement known as “deconstruction,” which can be viewed as:

I see articles that say, “we are living in the age of deconstruction,” where doubt and disillusionment adhere to Christian faith in this modern American landscape. OK. Maybe for some who cater to this movement and determine that they are part of deconstruction anytime they question the Bible, their faith, or experience a traumatic event. As Christians we are going to experience times when we simply lose, or ignore faith in YHWH, choose our own path, or selfishly choose what we want every moment of the day. That happens. That is why YHWH has sent us Ruach HaKodesh the Holy Spirit to guide us and help us and bring to remembrance all things, the salvation of Christ Jesus, what God has done for us, and to return the lost son/daughter back to the Father.

This is part of your walk with YHWH and His care for you daily. If you never experience any hardship, how can you have faith? One cannot know or understand those in poverty unless YOU experience poverty. Sure, you can “feel bad for someone” who is experiencing cancer, poverty, hardship, but you certainly will not know the suffering of such unless you experience similar as well. Yet, when we find ourselves within these circumstances the words of Jesus stand out,

Will your faith be snatched away by the wicked one, by troubles, or financial cares of the world? Each person knows within their heart who they are and must face what they are as the Spirit enlightens you. We all have the choice to fall away or keep on keeping on – it’s a clear choice, not muddled, or in the grey as those who believe in this deconstruction philosophy. For the philosophy itself is confusion, to render you confused, as if under some grey cloud that you hope departs from you. The best action is to read again the words which you have forgotten, the words of Christ our savior.

You might say, “I do not feel like reading the Bible again. I have read it so many times. I don’t have time anyway.” I said this for years. Did YHWH let me go? NO, He was patient with me as I fled about under my own sinful will. Righteous in my own ideas, pious in my own way, until the fall. We as mankind will always fall, not because it is our nature, but because you have the enemies of hell displacing your footing!

Why do we tend to forget that we have an enemy who wishes to destroy us? It is not the police, the demoncrats, as they are called, the republicans, the illuminati, the zionists, the Jews, Islam, or your next door neighbor. It is the fallen angels who desire to have you, the deconstruction of your soul, both on earth and for eternity. This is what you wage warfare against. This is what the fight is. As a Christian, a Jew, a Gentile, a PERSON, you need to understand, all the things of the world are used for your demise and only YHWH has provided your defense and salvation through Eashoa, Jesus the son of YHWH, our salvation, our Adonai, our deliverer. 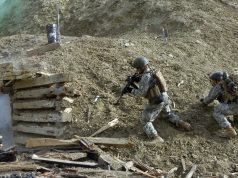 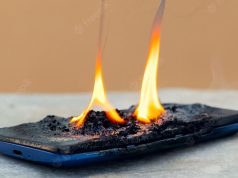 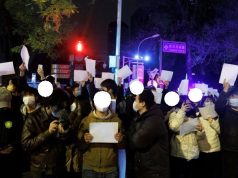