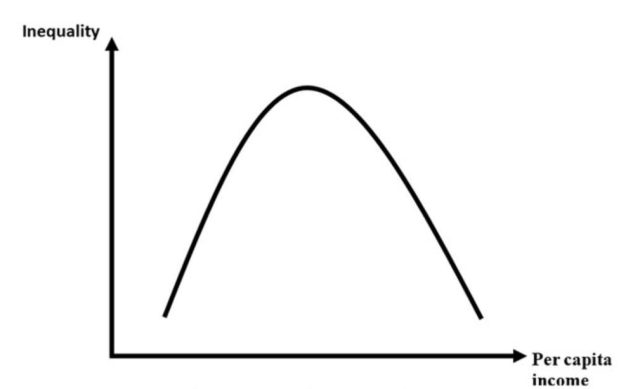 “On the contrary it showed that Kuznets’ conclusions were only accurate for the period that he studied, and could not be generalized for other periods.” Syed Yusuf Saadat 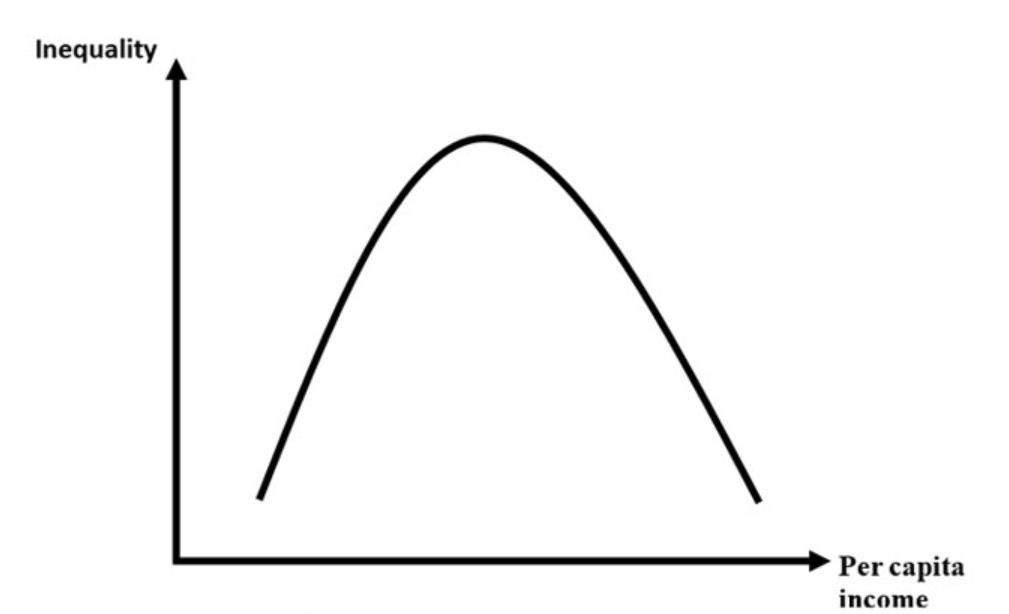 It seems those interpreting the curve have no idea what it actually means.

Simple explanation in this economic reality,

So these guys throw in the kitchen sink of “decay” theory to sell a model of conformity.

“In the early to mid-1990s Gene Grossman and Alan Krueger conducted several studies which examined the relationship between economic growth and environmental quality.” 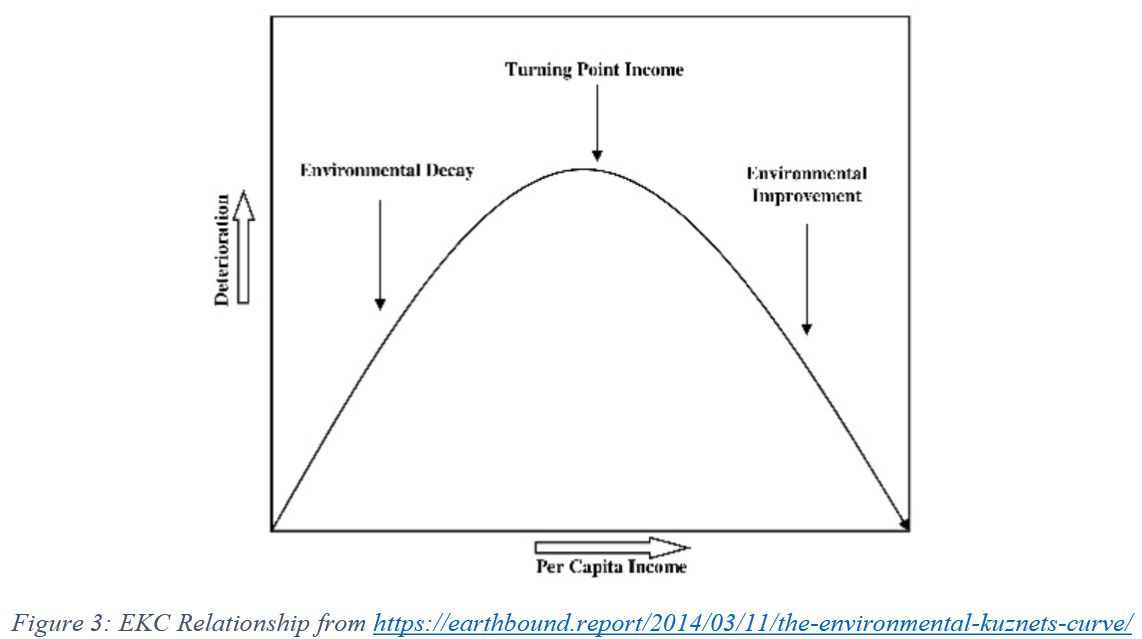 The economic environmental addition known as EKC is THEORY.

“In this framework, the EKC postulates that low income levels are correlated with a growing deterioration of the environment, but after a certain threshold point of the income per capita, the relationship between the two variables becomes negative again. In this way, this hypothesis is supported by the argument that
higher levels of development imply a change in the economic structure in favor of industry and services, where production processes turn to more efficient and environmentally friendly technologies that help to preserve natural resources and reduce significantly the environmental deterioration. Similarly, the EKC shows the development of an economy over time. In a first stage, the economy is based on the agricultural sector with a strong impact on the quality of the environment. In a second stage, the industry is developed and, although it generates a higher level of wealth, it causes a great damage in the environmental’s quality. After a threshold point, the economy sustains its growth in efficient and cleaner technologies, mainly in the services sector. Thus, the EKC hypothesis emphasizes that the economic growth is a precondition for reducing environmental pollution (see Beckerman 1992).” 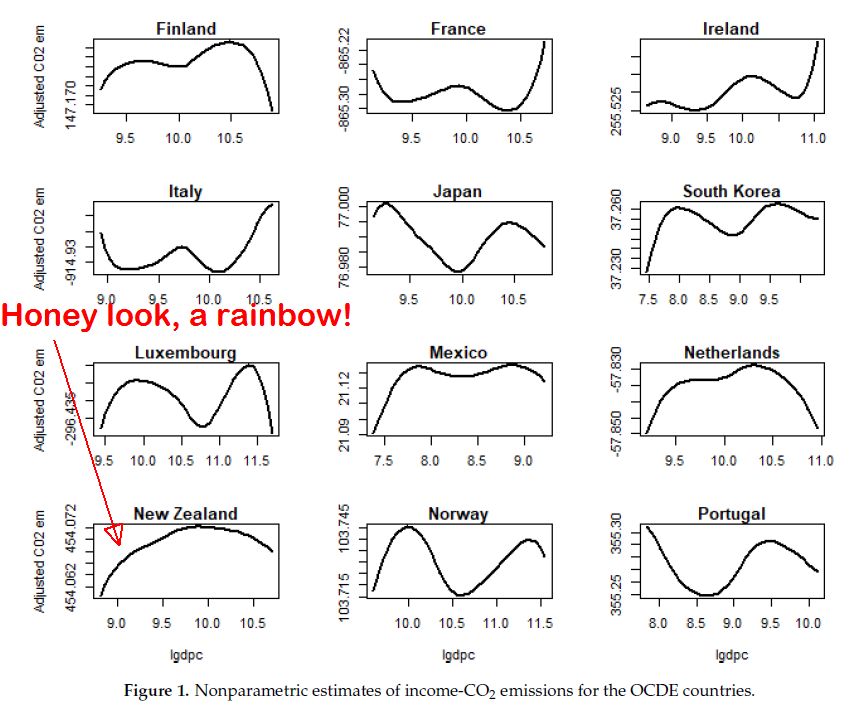 If we head on over to the Bank of Finland (Suomen Pankki) and listen to Governor Olli Rehn, Bank of Finland, Panel at University of California, Berkeley August 23, 2022,

“The total market cap of crypto-assets reached a peak of close to USD 3 trillion in late 2021. It has since declined to less than USD 1 trillion during the market turmoil this year. As was to be expected, the sharp revaluations of crypto-assets have led to a number of casualties and heavy losses for many investors.”

“Let me next turn to central bank digital currencies. At the ECB, as in a number of other central banks across the world, we are looking into the possibility of introducing a CBDC, a digital euro. The investigation phase started in late 2021 and is expected to be concluded in October 2023. Once the investigation phase is completed, we will decide whether to embark on actually building a digital euro.”

“It is important to note that a digital euro would complement cash – not replace it – by allowing central bank money to be used in digital form also for retail purposes. We will continue to safeguard citizens’ access to and the usability of cash across the euro area, even though its role as a medium of exchange has been diminishing rapidly, at least in some countries.”

Olli Rehn is wrong here on a couple points as he is basing dogma from intra-corporate view, or organizational ideology as drummed into historical economic heads.

A central bank should absolutley NOT provide the monetary anchor for ANY economy. When this occurs, you have rise of authoritarianism, which leads to technocracy, or a derivative thereof – each and every time. The only factions that argue this reality and logic are those who wish to maintain control of their central bank. “Always for the people” they chide to oversight committee. Who are you kidding after 300 years?

Common sense really. We have the money so of course we argue that we should control it.

Who or what then should be the anchor of economy? Certainly not any one individual or hegemony of organization. As we have vast historical tide of absolute corruption, mismanagement, and irrevocable misplacement of trillions in fiat “loss” and any audit of such is always coverd-up, excused, or bleached. Which lends to further corruption, installing politicians, lying to the public, paying off lawyers, judges, and passing laws to further aggress until demise occurs. Defined organically as catabolism in biomes, which none now in our vast technological state can argue against. And what we know in science as to catabolism – there is no stopping until it’s finished. Right now catabolism concerning fiat is in final stage. You all know this and so do anyone worth their salt in economics.

To stay a step ahead now in corruption one must organize others to lash out in confining the populations under a lock and key social construct which we know already defeats your models in terminal rebellion. The way of the guillotine one might say as a new form of bushido the masses will embrace as a pride and honor to exterminate the dishonorable, selfish, anti-communal mammon.

The answer is fairly simple but difficult for those concerned on maintaining their control on infrastructure. Your fear of “sharing” destroys economy, viability, equal justice, and is platitude for flexible liquidity that alleviates collapse.

Multiple anchors are the answer and when I say multiple we could allow for a twelve prong stabilizer through both transparent CBDC, fiat, commodity and paper lubricant as if one break they do not all shatter and must be “shared” not by centralization but rewarding those who “give” rather than take. Mr. Bloomberg seems to be a giver and I would like to see him wearing Tzitzit for once in public, maybe then YHWH will open his eyes to the fallacy of centralization and the pittance of his fellow man. As Torah commands us to uplift the poor and free the oppressed, not do the opposite, which is catabolism as designed by Melech HaOlam.

Albeit what I discuss will hardly be heard by the heralds of the destruction of men. I see only one kind of philosophy amongst the supramagnates and that is to shore up all, then give it all away in a vast flurry before one falls sick and die to recompense some spiritual finagle in a jest of placing coins on one’s eyes before riding the boat to perpetual darkness or everlasting light, whichever lot you have chosen.

Until we embrace Torah as a way of servitude in the degree of maintaining harmony with nature, finance, and enterprise we shall falter as to old. Shabbos alone defeats all models of climate change and renewable nonsense, but yet who wants to listen to wealthy Jews who refuse adherence to economic models laid out by YHWH centuries ago?

We are guilty of pushing alter ego gentile methods, while accused of enslaving humanity when we hold the reigns. Could there ever have been a universe where we could arise to rule and lead without discontent? Elohim, blessed be His name, spelled it all out, a truly golden brick road of peace designed by the betterment of our downtrodden brothers in whom we should delight and treat as though we had no wealth but desired only that those before us should be loved as we would love ourselves.

We instead chose the easy way of selfish magnitude at the detriment of all society and those we should rule and expect a thank you from both the goyim in return and a pat on the back from Eloheinu.

Thus said the LORD of Hosts: Execute true justice; deal loyally and compassionately with one another.

Do not defraud the widow, the orphan, the stranger, and the poor; and do not plot evil against one another.

No, this is the fast I desire:
To unlock fetters of wickedness,
And untie the cords of the yoke
To let the oppressed go free;
To break off every yoke.

It is to share your bread with the hungry,
And to take the wretched poor into your home;
When you see the naked, to clothe him,
And not to ignore your own kin.

Then shall your light burst through like the dawn
And your healing spring up quickly;
Your Vindicator shall march before you,
The Presence of the LORD shall be your rear guard.

YOM YHWH is our great reset unless we throw off our shackles of greed and there is nothing a Klaus Schwab, Bill Gates, Prime Ministers, Presidents or anyone can do to change this course, but rather adhering they are the catalyst of our demise, vengeance from the Lord our G-d for disobedience and in which our shame shall as Nevi’im have foretold be seen before all nations until we turn and say “Oh Lord My G-d how we have forsaken thee! Forgive us!”